You may be able to get a McAloo burger in India, a yuzu milkshake in Japan or chicken ‘n’ spaghetti in Malaysia, but if you step into a McDonald’s anywhere on the planet, you know where you are. In fact, you’ve just stumbled into a real-life storyverse.

One of the McDonald’s founders once said that he didn’t actually sell burgers, he sold a clean, safe place to eat burgers. A friendly, happy world that was the same every visit, wherever you went. And you’ll know it too: the storyline you can pick up from visiting any one of their stores, or by viewing countless campaigns over the years.

The McDonald’s mission is simple: to provide the same warm, comforting quality every time. It doesn’t seek to excite, or challenge (despite the tantalising glimpses of the lesser-spotted McRib).

The hero is the brand, sometimes exemplified by our creepy clown pal Ronald. The enemy, on a basic level, is the idea that consistent quality can’t be delivered fast: it should either take longer or cost more. But really their enemy is change, it’s growing up. Menus might differ, the graphics might alter, but McDonald’s will always be just what you expect, and nothing more. That’s why people like it. It’s no wonder that the phrase ‘secret sauce’ has become an advertising cant. The McDonald’s storyverse is so strong that you don’t go there to eat a burger. You go there to eat McDonald’s itself.

However, there isn’t only ever one storyverse, even in the world of burgers. When it comes to Burger King, their world couldn’t be more different. Here the hero is the customer, brought to life in the form of the uncompromising ‘King’. Their mission runs in the complete opposite way to our mate McDonald’s—no to similarity, no to reassurance: you should have exactly what you want when you want it.

And you can see this in some of their most recent campaigns. McDonald’s where an unreasonably demanding kid gets her dad to drive her to buy carrots for Rudolph (because of course we all buy our carrots from Micky D’s), and then Burger King, who as well setting their stores photographically alight, also pissed off a whole load of Google programmers in one of their latest campaigns.

However, the beauty of these two different storyverses is the fact that they can connect with the hyper-connected consumer. Build a storyverse strong enough and it can take all kinds of stuff.

Burger King’s ‘OK Google’ campaign worked because, though it was technically an ad that needed to work on TV, it was fun and provocative enough to cause a storm for the 95% of people who would probably never even see it on a TV screen.

Their world was expanded further when they ‘gave’ a whole store—they wrapped it and everything—to one of their biggest French fans (he had commented the most times on their social media pages). Proud store owner Sullyvan now has his own parking space, a golden tray, and can have all the free whoppers he wants for a whole entire year. This ridiculous show of customer-centricity took their storyverse to ad absurdum levels: proof of a brand that isn’t afraid to go the extra mile when it comes to living their storyverse.

McDonald’s too have expanded the warm, fuzzy world of their storyverse into their other ads. Their ‘Pay With Lovin’’ campaign, a prescient glimpse into humanity’s future, encouraged consumers to perform simulacra of affectionate acts for food—anything from an awkward fistbump to calling your mum.

Two arguably very similar, and massively successful products, with two completely different storyverses. However it’s a whole different kettle of fish when you try and jack someone else’s storyverse. Well, that’s exactly what happened to poor ol’ Pepsi. The whole Kendall thing. Yeah, you remember. Well, aside from everything that’s wrong with that ad, there’s nothing wrong with that ad… except: it was Coke’s storyverse. Happiness, bringing people together—this is Coke’s hood, not Pepsi’s. That’s part of the reason why it was so uncomfortable on so many levels: they didn’t stick to their storyverse, they encroached on someone else’s, with dire consequences.

So go buy your cheeseburger, it doesn’t matter where from—it’ll taste the same whatever, really. The important point is you stick to your storyverse. Bon appétit.

Or, if you missed it, catch up on the entire first season.

A lot of agencies talk about storytelling. And, at face value, it’s what all advertising agencies are doing. But for us storytelling isn’t an outcome, it’s a process. Stories are the most powerful form of communication. They shape people; they shape culture. The most powerful stories have a clear underlying narrative structure, with a conflict at their very heart. We use narrative thinking to unlock powerful creative strategies that create impact for brands in culture. Impact that turns your brand into a commercial success story.
Follow 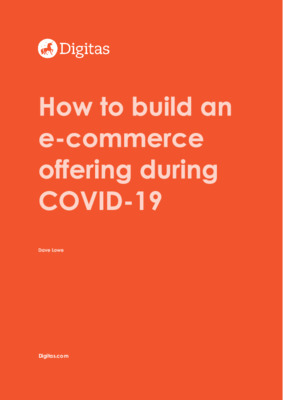