Despite all the scandals, the outrage, and the constant and appalling press coverage, Donald Trump is still very much in the fight for a second term. Ahead of the first presidential debate tonight, Jamie's piece in City AM today takes a look at why...

Brand Trump is keeping Candidate Trump in the race for the White House.

Scandals and appalling press are usually bad news for politicians.  Before the presidential era of Donald Trump, it was a given that major missteps, major insults to large groups of the population (especially the military), breaking the law, or being impeached were close to terminal for US presidents.

It’s fair to say that President Clinton wriggled out of a major hole, but he had one massive scandal, rather than a continued series of negative events — a constant barrage of critical press coverage and a humiliating stream of tell-all books and damning reports from former cabinet members, close family, and ex-colleagues.

On Sunday, The New York times released a hugely in-depth story outlining Trump’s chronic business losses and years of tax avoidance. Earlier this month, taped conversations with veteran journalist Bob Woodward were released showing that Trump intentionally and consistently played down the severity of the coronavirus to the American people. Then there was the article in The Atlantic (verified by multiple other media outlets, including a reporter at Fox news no less) that claims Trump called US troops who died in battle “losers” and “suckers”.

Despite all this, and not to mention multiple other significant challenges, Trump somehow weathers the storm and retains rock solid support with roughly 40 per cent of the country. Going into the first presidential debate tonight, he is still very much in the hunt for a second term.

For context, in 2008, amid the financial crisis, George W Bush’s approval rating stood at just 25 per cent.  Following Watergate, Nixon was at 27 per cent and in 1953, Harry Truman was also down at 25 per cent.  Yet after three and half years of jam-packed, never seen before scandals, relentlessly appalling media coverage, the loss of over 200,000 Americans to Covid- 19, and an economy shattered by the virus, Trump’s approval rating has remained steady, at 43 per cent.

This is only five points behind Obama’s average approval rating over his eight years and actually three points higher than Obama’s lowest ever point as President. Trump still remains about seven percentage points behind Joe Biden in poll-of-poll national averages, but has an Electoral College advantage thought by some to be worth around three points. So he’s still in the game, and amazingly, some bookmakers still see him as favourite. Indeed, when Americans are asked “who they think will win in November”, Trump consistently comes out on top.

So the question is, how?

The answer is not because people love Trump, or even because of Trump the person. It’s in spite of that. Of course his base love him, and older conservatives are buoyed by his opportunity to have nominated yet another Justice to the Supreme Court, but this doesn’t equate to anywhere near winning. In fact, 50 per cent of Americans think that Trump is a racist, with a further 13 per cent saying he might be.

The reason Trump still has a good shot at winning in November is because of the brand and the movement that’s been created around Trumpism.  At its core, the brand stands for “taking a stand” and for anger.  A large group of Americans have feelings of disaffection, disenfranchisement and anger about a seemingly unfair class structure in a country that has forgotten about them — with the liberal elites and mainstream media pitched as the enemy.

Brand Trump is basically Trump being angry at the same people they are.  It’s a big F*** You to the establishment from a large group of people who feel that no one has listened to them.  But now, finally, they are energised and they have a movement to support.

This is the power of the brand.

Watching Biden’s range of campaign TV ads, there is much attention and focus on criticising Trump the man (and his character) but little attention or thought put into understanding Trump the brand, the movement or why his support remains strong. The criticisms that have come thick and fast since 2016 (racist, bigot, incompetent, etc) have done little to erode the rock solid support. Bottom line? They support Brand Trump, and they have a common enemy to aim at.

Despite being behind in all the polls, less than 40 days out, FiveThirtyEight’s prediction model still gives Trump a 22 per cent chance of winning (it gave him a 28.6 per cent chance in 2016, more than any other model).  And this is before the three critical televised debates, which given Biden’s challenges in this kind of format and the increased attention due to lack of normal campaigning this year, could have a dramatic impact on the race.

Trump may have been proven to be all sorts of unpleasant things, his character has been criticised more than almost anyone in political history, and he’s seemingly made more inappropriate and offensive comments than anyone could imagine anyone getting away with — but he’s still there fighting.  And it’s because of the strength and energy of the brand that has been created around him.

My advice to Biden? Choose your battles, and think about Trump the brand rather than just attacking Trump the man. 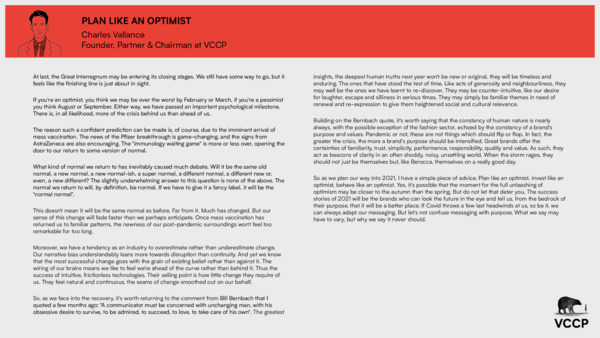 Isobel
“Culture” in the UK is under attack; what are the implications for fashion?
Thinking, #StayConnected

“Culture” in the UK is under attack; what are the implications for fashion?