The original plan laid out for Dave Day's life was for him to become a farmer - since then, he's worked at organisations like Mother, WRCS and W&K.

As a young man passing through a job at a design firm, he was encouraged to go to college, and ultimately did a night-school Masters in Fine Art at Goldsmiths. Today, he works at Crispin Porter Bogusky, as its Executive Creative Director.

There, he helps oversee the 40-strong team at Crispin Porter Bogusky's London office, with clients including The Glenlivet, Ballantine’s, Beauty Pie, American Airlines, Hotels.com, and PayPal.

We heard from Dave about the things he's learnt.

Which single daily habit or practice could you not do without?

I wish I could say it’s my morning run at 5am, or repeating out loud how grateful I am for my children, or a pithy life mantra like ‘keep things simple’ - but the reality is, it’s coffee.

What's been your luckiest break?

Probably getting a job as a ‘creative’ at Fallon. I didn’t know the job of a ‘creative’ existed back then. I was a designer by trade and advertising seemed far from cool. I started freelancing alongside Juan Cabral and Richard Flintham. They were making work that didn’t seem like advertising; Sony Balls and paint, Cadbury’s Gorilla - I was understandably hooked. That opportunity helped redefine what I thought being a creative could be.

My biggest failures mainly happened during my Masters at Goldsmiths. The crits were horrific. Many students were in tears. It sounds over the top, but art can be very personal.

It was that brutal honesty that made the work so much better for everyone concerned. I still think about those mistakes, that feeling, and the lessons learned when the bruising healed.

What is the best investment you've ever made, either financial or time?

I recently completed a Masters in Fine Art. I negotiated going down to four days a week to attend lectures and crits. It took four years as opposed to the full-time course of two.

It was at Goldsmiths in London, one of the top art universities in the country. I found it incredibly difficult and revealing at the same time. I had never really leaned into education, especially the academic side. But this was a revelation; psychology, politics, sociology all became interesting.

It cost a fortune, took up so much of my time and was difficult for my young family. But it was worth it not just for my job in the creative industry but in understanding the world around me better.

How would you describe your work/life balance?

It could be better. The main difficulty is how workload in this industry ebbs and flows. Advertising can be very high pressured, but it’s made sustainable because that pressure eventually eases off.

It’s this inconsistency that can make ‘life’ difficult, to develop routine and make plans outside of work and maintain a stable balance.

Which book would you recommend others to read and why?

I find you go through periods of your life feeling at odds with the world, like something doesn’t quite fit. Then all of a sudden you come across someone, or a film, a piece of music that helps put you at ease because it gives you a better understanding of who you are.

I came across such a book in 'Quiet - The Power of Introverts in a World that Can’t Stop Talking' by Susan Cain. It gave me an awareness and a reassurance that other people feel that way and reasons why. Being an introvert isn’t binary, so this book is relevant for everyone and if you’re a proud and loud extrovert than its definitely worth a read for everyone else’s wellbeing.

What one piece of advice would you give your 21-year-old self?

Who or what has had the single biggest influence on your working life?

I left school as soon as I could - people didn’t really do education where I grew up - and got a job being the ‘office tea boy’ in a design firm in Plymouth. The designers that worked there convinced me I needed to go to college.

No one in my family ever went into higher education so I never really considered it an option. That advice got me to college, where the tutors gave me the same advice, which pushed me to go to University. By then I had the confidence and ambition to push myself to Singapore to work at Saatchi & Saatchi. That seemingly innocuous piece of advice in the small basement of a Plymouth design studio all those years ago was probably the smallest and greatest influence in my career.

Tell us something about you that would surprise people.

I used to be a farmer.

It changes daily. The concept sometimes becomes an issue in its own right. But right now, success for me is feeling satisfied. You can’t control everything, and you certainly can’t win at everything, so it’s learning to enjoy the good bits and not worrying too much about the bad bits. Success is finding that balance.

Dave Day is the Executive Creative Director of Crispin Porter Bogusky London. This article was originally posted in Prolific London. 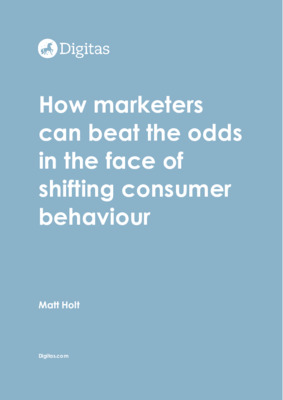 Digitas
Is a more agile approach needed for the future of sponsorship?
Thinking

Is a more agile approach needed for the future of sponsorship?

MKTG
Oystercatchers
We use cookies to help improve your experience. By continuing to browse our website you are consenting to our use of cookies.
Learn more